On my previous blog, I had interviewed the admin of a group called Isolate ByoBlu, whom I had met via the federated social network Mastodon. The same person contacted me recently and told me that Byoblu's YouTube channel was recently shut down!

For those unfamiliar with the context, ByoBlu is a far-right news source based in Italy; it is somewhat analogous to Breitbart News for Italian speakers. As one might expect, ByoBlu's founder is also associated with a far-right movement; his name is Claudio Messora. Messora is a blogger and media personality connected to the Five Star Movement of Italy. 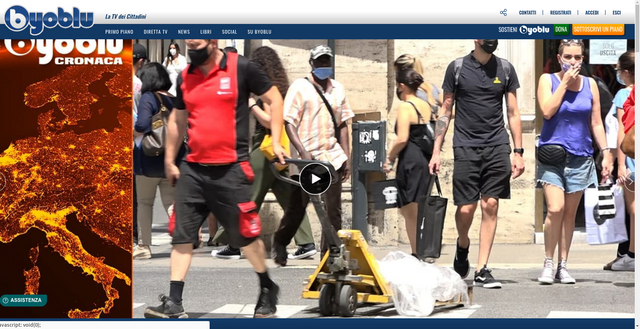 Given that this has been one of the goals of Isolate ByoBlu, this is certainly a great victory. The group takes its name from a similar group called Isolate Gab, which had been geared toward defederating the social network Gab. Mastodon and other social networks like it, such as Misskey, Pleroma, PeerTube, Funkwhale, and PixelFed, are federated, i.e. hosted on interconnected servers, and Gab was originally federated with these other social networks.

Like ByoBlu, Gab centers around far-right politics such as anti-immigration, racism, and conspiracy theories about subjects like COVID-19 and genetics. It is worth noting that Gab did defederate from the rest of the fediverse.

ByoBlu still operates its own website and has a Facebook page, but the loss of its YouTube channel is a huge blow to its growth as a social network. YouTube has had other controversies connected to groups like ByoBlu, including the fact that its algorithm seemed to unintentionally recruit viewers to far-right groups based on their viewing history.